What is sports day? スミス英会話大津

You are here: Home / Blog / What is sports day? スミス英会話大津

Sports Day, more formally known as “Health and Sports Day”, was started in 1966 to promote health and community spirit. It was started only 2 years after the 1964 Tokyo Olympics. In Japan, the summer season is very wet, first with the rainy season in June and July, then a very humid and muggy August, followed by typhoon season in September. So the Japanese government decided to hold Sports Day in October to avoid the summer heat and humidity. Sports Day is usually held the 2nd weekend of October, and the 2nd Monday is a national holiday.

Most communities all school across Japan celebrate Sports Day with a sports festival which is similar to a mini Olympics. These festivals include many of the traditional track and field events, such as 4 x 100m relay, 100m sprinting, and long jump, as well as many other fun and exciting events. Some of the more colourful events include: ball toss, tug-o-war, rugby-ball dribbling races, sack races, and so on. Another common event is often simply called the “exciting relay”, which is an obstacle course relay including any number of different challenges: 3-legged races, making a stretcher with a blanket and bamboo poles and then carrying an “injured” teammate, laundry hanging, crawling on hands and knees under a net, doing cartwheels across a mat, running in giant clown shoes, and any number of other creative activities. As every community has different ideas and history, there are endless possibilities to the fun events you can find at your local sports festival. 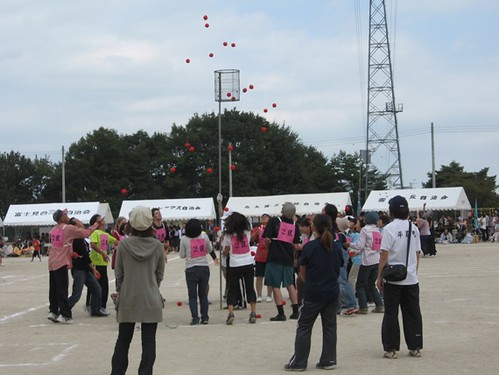 The festival usually begins around 8:30 am with a parade featuring all the different teams that will be participating: it could be divided by neighbourhood, class, geographic area, or school. There is usually a local marching band providing music. Once the parade has gone around the field and lined up in the middle, the band will play the Japanese National Anthem and the Japanese flag will be raised. Local officials will make speeches welcoming everyone and wishing all the teams “good luck”. Then everyone will spread out across the grounds for group stretching (this stretching routine was developed by the government and is done daily by many Japanese people; the stretching routine music is broadcast daily on the radio and TV). Then it’s time to start the events. 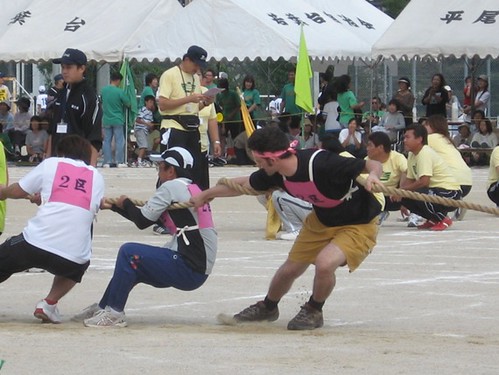 Every event has prizes for the winners, usually something useful for around the house such as boxes of tissues, laundry detergent, dish soap, hand soap, saran wrap, and so on. Children’s prizes include sports drinks, snacks, and small toys. At the end of the day everyone is usually seen walking away with a few bags of “prizes” and big smiles on their faces. Around 12:00 noon, the events will take a pause for lunch and traditional dancing. Lunch is usually a small Japanese Lunchbox including rice, fish, stewed vegetables, sushi, onigiri (rice balls) and other small and healthy Japanese treats.

As with the Olympics, the final event of the day is the 4 x 100m relay or 100m sprint. Following this, the points totals are tallied and the ending ceremony involves congratulatory speeches by local officials and the handing out of prizes to the top teams. Then it’s clean-up time and home with your pile of prizes! This is one of the nicest, community oriented festivals in Japan. If you get the chance to be in Japan in October, Sports Day is a must!