Sunday March 8th saw 18 participants from Smith’s School of English Ohtsu and Smith’s School of English Kamishinjo hike up Mt. Hiei in beautiful Shiga prefecture. The day started with meeting at JR Ishiyama Station JR石山駅 at 9:00 am, introductions all around, and then a short ride on the Keihan line from Keihan Ishiyama 京阪石山駅 , through Keihan Zeze 京阪膳所駅 and all the way to the end of the line at Keihan Sakamoto Station 京阪坂本駅. From there, the 18 students, student’s families, and teachers hiked for about 3 hours; along ridges, through gullies, past waterfalls, up and down and up some more. Ohtsu school team leaders Kimiko and Masako alternated taking the lead with Kamishinjo school leaders Nai-san and Ken. Ohtsu Teacher/ cameraman Edward ran up and down the line snapping photos and filming brief clips of random goofiness and catching snippets of English conversation, and Kamishinjo teachers/ owners Carol and Yuichi pushed us along from the rear. 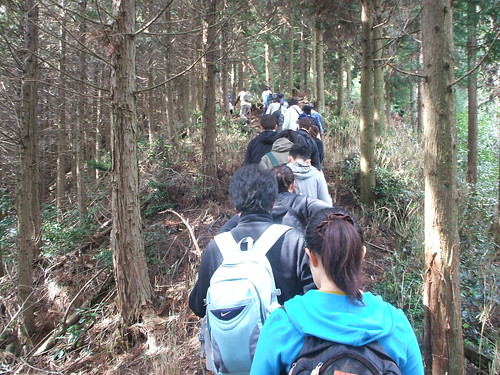 At the top of the trail (aka the “Hiei-zan Cable Car Mountaintop Station 京阪比叡山駅), the group of 18 weary hikers ate lunch together under the sun and over-looking the City of Ohtsu 大津町 and Lake Biwa びわ湖. From their lunch time mountain top platform, the hikers could see mountains aplenty, look over treetops at the valleys below, peer longingly across the lake at faraway Moriyama city 守山町, and even further away see the peaks seperating Shiga prefecture （滋賀県） from Gifu prefecture were barely visible. Lunch time was a time of joy for the students and teachers: everyone was talking animatedly, food was passed around and bellies were filled. It was a beautiful day to be out and about in nature. 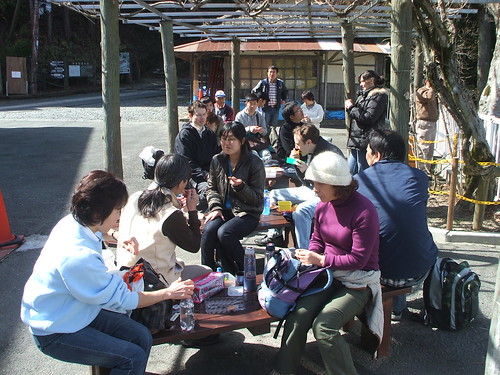 After lunch, a further 10 minutes of walking brought the 2 schools to the entrance to the Mount Hiei Enryakuji Monestary complex （延暦寺）, home and birthplace of the Tendai sect of Buddhism. This monestary is over 1000 years old and is a UNESCO World Heritage Site. At the peak of its power, this monestary controlled over 3000 sub-temples and had a huge army of highly trained warrior monks, although the tendai sect gave birth to the beliefs of the Pure Land, Zen sects. As they approached the main area, the travellers could hear the gong of the bell, echoing across the ridges and through the trees. Eerie yet calming, the bell has been ringing in that way for well over 1000 years. Some of the Ohtsu and Kamishinjo hikers proudly through their donations into the box and rung the bell for themselves, praying for good health in the year to come. 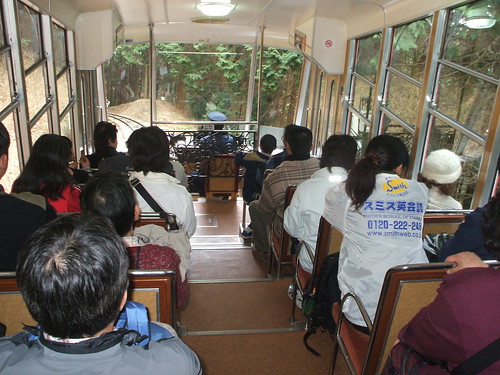 The hikers enjoyed the sites and sounds of this magical and mystical place, and then wearily trod back to the cable car station for the ride down the mountainside and back to life in the city. But new friendships were made, and the alliance between Smith’s School of English Ohtsu and Kamishinjo was strengthened even more, reminding us of the power of community and the strength and support of being part of a franchise system. More great events to come… more community ties to be made! 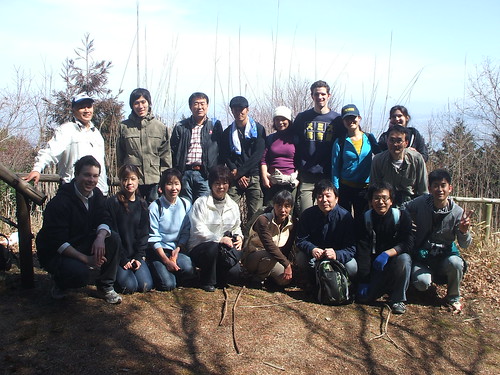