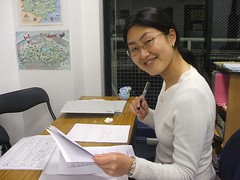 At Smith’s School of English Otsu, some students have a little difficult time, asking questions or saying anything such as “Really?” to keep the flow of conversation. Then, my thoughts flashed back to my high school days. I was taking English conversation lessons and every week I found myself stumbling over a word and decided not to say anything and simply smile. At that time, I always thought that there must have been some mysterious words that nobody told me how to use BETWEEN conversations, making it easier to ask further questions or comment on the story discussed. My teacher then couldn’t teach me what they were because they came out of his mouth naturally. But now I know what they are and how to use them! So, recently I started to suggest our students to use them. Here is a story:

Yesterday, I had a GREAT lesson with a student “M”. She is very eager to learn but she tends to say “e—to” or “u—n” or “nanyattakke” when she can’t remember some words or phrases in English. Every time she used those Japanese words, her speaking speed slowed down and stumbled over more words than before. Two weeks ago, I suggested her to say “WELL….” instead of those Japanese words and yesterday she tried it for the first time and it worked!! She NEVER used even a single Japanese word for the whole lesson! She kept talking and talking!! The next thing I tried with her was to show a sheet of paper that says, “How do you say (Japanese) in English?” and “What does (English) mean?” Successfully, she said “Well…………………..what does (English) mean?” couple times in 45 minutes. Then, she asked me “Well………how do you say (Souka–) in English?” And I said, “You can say ‘Oh..I see!”

What I told her was this: “when people are speaking English, their brain is in English mode but if they use even one Japanese word such as ‘e—to,’ their brain switches back to Japanese mode and it makes it very difficult to keep speaking in English. So, I suggest you to keep saying anything in English when you don’t know a word”

The student “M” proved that saying “well….” followed by “How do you say ….?” question helped her to keep speaking English in natural speed. I would like to note that this method also helped me cope with the silent moments every student experiences when he/she practices English conversation. I will be very happy if the below lists can help all of our students at Smith’s School of English 🙂

A list of some words mysterious to Japanese students (in my opinion!):