You are here: Home / Blog / Cycling in Japan スミス英会話大津

In November I started riding with a former SSE Ohtsu student “Ozachi” (his wife is still a student at our school). He is an older gentleman who is quite inspiring. He rides, runs, or kayaks every weekend and is in amazing shape. He rides with a team from Strada Bicycle Shop in Kusatsu City and invited me to join them for a few rides (which I accepted of course). The video below is from my second ride with “Ozachi” and the Strada Racing Team.

Anyway, in the tradition of Martin’s Driving in Japan series and Don’s Riding in Japan series, I thought I would add a Cycling in Japan series. Most foreigners only get to see Japan from the window of a train, and are limited to the sites that are near train stations. These articles are very eye opening and have given myself and my friends so many great ideas for places to go on the weekend.

I took up cycling and hiking about 2 years ago. Living in Shiga, this has given me the opportunity to go places most life-long Shiga residents never go. In Canada I lived on a small island in the harbour of a small city, and I prefer peace and quiet to the hubbub of city living. Hiking and cycling allows me to escape the bussle and noise of the city and head out into nature. Kyoto and Shiga prefectures are both ringed by mountains, containing a myriad of trails and paths. Within 30 minutes I can be out of the city and alone, on a quiet trail in the forest. 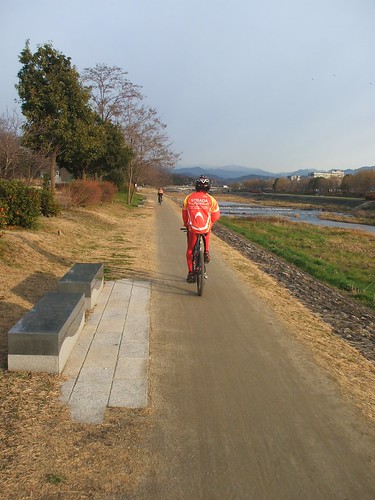 If you are looking for a hobby that keeps you healthy and fit and gives you the chance to be outdoors, enjoying nature, cycling and hiking are for you. Give it a try!

I made this video to show off a few of the spots where you can cycle in Kyoto city. This video follows us north along the Kamogawa River in eastern Kyoto city, up the west side of a northern mountain and down the east side. On the east side is a bald patch where they burn a large kanji during Obon. The kanji on this mountain is 船 which is the kanji for ship, so the mountain is called “船山” which means ship mountain. For more pictures and Japanese text, check out my student’s cycling blog HERE. (日本語) 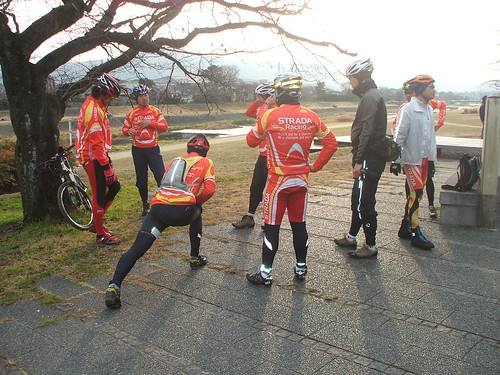 In Kyoto there are 2 major cycling/ jogging trails running north-south. One is along the Kamogawa and goes for more than 30 km on both sides of the river, which runs along the east side of Kyoto city. The other is on the west side of Kyoto city, and again follows along both sides of the river there. This second path runs from Arashiyama in the north all the way to Nara in the south, more than 60km. I believe at some point to the south of Kyoto city these two rivers meet and become one and lead south into Nara prefecture.

So if you live in Kyoto city or nearby, I recommend trying these paths. They are clean and level and smooth and have regular rest areas and toilets and so on.

Next up will be a journey along Lake Biwa in Shiga by bike.