You are here: Home / Blog / An Amazing Month: Nagasaki and Personal Bests

Chiharu and I had an amazing month at our school, SSE Ohtsu.

We started the month with the second half of our first Golden Week at Smith’s. As Don mentioned in “Golden Week Excursion” and Derek mentioned in “A taste of Canada at Smith’s School of English Tsukaguchi“, Golden week at Smith’s is wonderful and the holiday options are limitless. For us, we went to Nagasaki for 3 days. Nagasaki is a beautiful and historic city in south-western Japan, and we very much enjoyed our time there. I highly recommend it and would love to go back. To me the entire site is just fantastic however 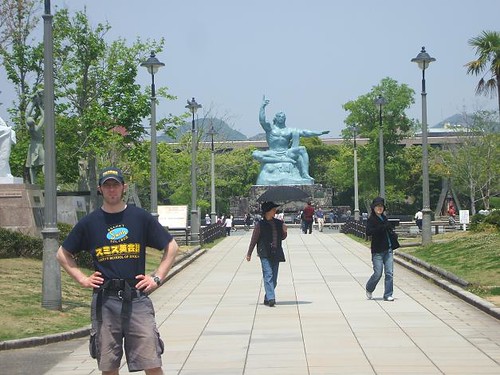 So after returning from this magnificent trip, we were full of energy and ready to TEACH! We entered May with renewed energy… and it paid off! At the end of the month we looked back and saw what we had done- our best month yet since taking over SSE Ohtsu in December 2007. We had a Personal Best of 7 trial lessons and a personal best of 5 new students joining! We also had our best month for flyering, hitting 5 satellite stations and a total of more than 28 hours flyering, passing out over 2000 flyers! (Not a lot by Osaka standards, but we are in a quiet rural area) The results were immediately felt, as we had 2 university students come for trials within 1 week of flyering at their station (actually 3 stations away from ours!)

The secret to our personal success is a simple formula: set a STAG of waking up by 7am every morning, set a STAG to flyer 3 mornings a week (buy yourself a nice breakfast after as a reward- it tastes better after knowing you’ve already worked for 2 hours promoting your school). Wear Smith’s t-shirts or hats or windbreakers everyday…. the fantastic head office staff will do the rest for you!