明けましておめでとうございます。Akemashite-O-Medetou-Gozaimasu. Happy New Year!
New year’s is arguably the biggest annual holiday in the land of the rising sun. Workers return to their hometowns to spend time with family, delicious food is eaten and annual traditions renewed. I love this holiday: families come together and relax, people play board games and relatives catch up. Here is a (hopefully) complete guide to Japanese New Year- all you need to know and the vocabulary to discuss it.

The Japanese new year starts in early December, when people start designing and printing New Year’s Cards (Nengajo 年賀状). Individuals send out cards to friends and family, often including a family shot or pictures of the major events of the year, such as trips or births or other personal or family milestones. Companies send out cards to their loyal customers, thanking them for their patronage. These cards need to be in the mailbox by December 25th to guarantee delivery on January 1st. However, if you have suffered the passing of a family member during the year, you do not send out New Year’s cards, but instead send out a card announcing that you are in a period of mourning (Mochu 喪中).

Most companies, team, clubs or other social groups will host end-of-year parties (Bou-nen-kai 忘年会). These are usually held at a local restaurant or pub and are a chance for coworkers to enjoy casual time together, or for clubs to meet outside of their usual activity, or for old friends to get together (like a class reunion).

Shopping time. Families go shopping to prepare for the end of year meals. There are several fabulous new year’s traditions in Japan and preparation is key. The most important thing is that preparation is done in advance so that for 2 or 3 days everyone can enjoy sumptuous food with little cooking and less cleaning. More on the foods of Japanese New Year below. I also find it interesting that January 1st and 2nd (and sometime December 31st) are the only days of the year that supermarkets are closed.

Families gather to eat and relax and watch TV. Japanese New Year’s is a time for special TV programs. New Year’s eve is highlighted by a music program of the most popular musicians of the year. This is a 5 hour NHK Special live stage where the biggest stars in Japan can perform their hits. Then at 23:45 every station has some countdown program and from midnight onwards various programs discuss the previous year and the year to come. January 1st and 2nd feature a comedy duo challenge, university marathon relay, quiz shows, talk shows and other sports events. Most people relax during this time, eating sumptuous dishes and watching TV.

The first shrine visit of the Japanese new year is a chance to start the year off right. People visit a local shrine to pray for health and fortune for the year to come. Students pray for success at school, families pray for the health of their newborns and seniors, company presidents and small business owners pray for a successful business year. The most popular shrine in Japan is Fushimi Inari Shrine in Kyoto, which sees over 2.5 millions visitors during the first three days of the year (equaling the number of visitors for the annual Hajj Pilgrimmage in Mecca)! Some people visit a shrine at midnight on the 31st, to ring in the new year and then pray, others go to a shrine first thing in the morning of the first, still others go on the 2nd or 3rd.

Save the best for last! Food is central to Japanese new year. Here is a quick guide to the keys dishes.

Toshi Koshi Soba (年越し蕎麦): Typically eaten on the evening of the 31st, these long buckwheat noodles symbolize long life and good health, as the buckwheat plant is hardy. Often they are eaten with a piece of grilled sardine or a deep-fried shrimp or some other “long” toppings.

Osechi Ryouri (おせち料理): An elegant and luxurious box filled with a variety of foods. These foods are usually expensive, as they are made with the best ingredients. Foods which are red and white are prefered, as white symbolizes purity and red symbolizes good fortune. For more on the symbolism of various osechi dishes, click the link above.

O-zoni (雑煮): Ozoni is a hot soup with mochi (pounded rice cakes). This is one of my favourite traditions, because there is such variety from region to region. In Kansai (where I live) we typically have a white miso based soup, but in Kyushu (where one of my students is from) they have soy sauce based soup. Some areas prefer sweet soup and thus choose red bean soup (Zenzai 善哉).

Amazake (甘酒): Amazake is a traditional rice-based drink which is enjoyed at New Year’s time. Though it can contain alcohol, it usually doesn’t, so that everyone can enjoy it. It can be drunk cold, but December and January are quite chilly in Japan so most people enjoy drinking it hot. Shrines and temples often hand it out for free to people who have come to pray.

Otoshidama (お年玉) are monetary gifts, traditionally given by elders to children. Usually given in a small envellope by parents, grandparents and aunts & uncles on new year’s day. Some people give a set amount, such as 1000 yen, others give an amount based on a child’s age or grade. Naturally, children love this tradition!

Want to know more about December in Japan? Read these blogs:
Christmas and New Year in Japan
Kentucky Fried Christmas in Japan 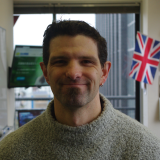